TLDR; VIM is hard but learning the basics will pay of quickly. Drop nano today and be more effective tomorrow. If you have some familiarity with cli interfaces I promise you will be more effective within just one hour.

A word of warning at the beginning: You won’t learn VIM by reading and you won’t get the real benefits unless you try it yourself! Dozens of people will tell you it’s awesome, but unless you experience it yourself, you won’t know what I or anybody else advocating VIM is really talking about.

In my previous post I was comparing my setup from when I started out to now and said I would discuss some of the changes. Changing my shell based texteditor from nano to vim is one of my most recent changes. The experience is very fresh for me. It was not my first try to do this but two years ago I failed missearbly. This time I did things differntly and I want to share my learnings with you. This blog post is about motivating you to start using VIM as your shell based editor and targeted at novices.

Some background and why this matters to me (and maybe to you):

I do a lot of my work with kaldi speech recognition toolkit. From a user’s perspective it consist mostly of shell scripts that tie together a lot of C++ binaries. As speech recognition needs a lot if computing power this is mostly done on remote systems. So when experimenting and trying things out, you have to change a couple of values in a shell script every now and then, maybe add some new condtions or a simple flag/value you want to pass from the shell, nothing to complicated really. So I did either use nano or vscode over ssh to do those edits. Both came with their own issues and advantages.

my evaluation/ observations of using nano

my evaluation/ observations of using vscode over ssh

My overalll experience using nano over the years, was a bad one. I had real meltdowns with nano, as changing seemed easy and intuitive but everything just went to shit the moment I used nano. It just didn’t support me enough. I had to concentrate harder than I should have to with a minor change as it did not offer any support.

So Please do yourself a favor and stop using nano now!

I will not argue to drop your IDE and switch to VIM altogether!

Don’t drop your IDE just yet. I won’t argue that. Without massive configuration, work and effort VIM just won’t be a viable alternative to a full blown IDE. And let’s be honest, just editing your code faster, won’t make you a better programmer or make you think faster. Usually typing and editing is not the limiting factor when it comes to programming (unless you are in a hacker movie ;)). I don’t think there really is a point to be made in that direction. But maybe switching keybindings to the VIM bindings will help you to become more efficient and never again need context switching and remembering different keybindings.

Why is VIM hard?

VIM is different than other editors. It does not work like you would expect a texteditor to work. It is hard, because it has modes which is very uncommon for most software today. The modes are:

To edit text you have to switch from normal mode to edit mode. To navigate or process text based on commands, you have to be in normal mode. For copy and pasting you need visual mode. As soon as you wrap your head around this concept it should be relatively easy to figure out. Don’t let yourself be demotivated by VIM being “hard”, you probably are just not used to the usage concept. You’re probably smart and had to learn a lot of hard things like coding to even be reading this.

Top reasons not to use VIM: 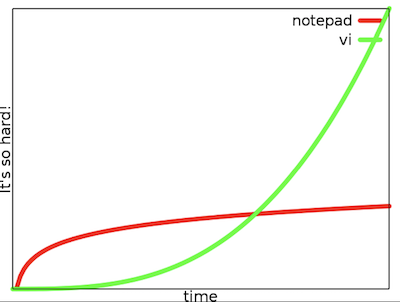 Yes, it’s complicated and I agree that most people who accidently open a file with vim will have trouble exiting it, but you’re not most people. 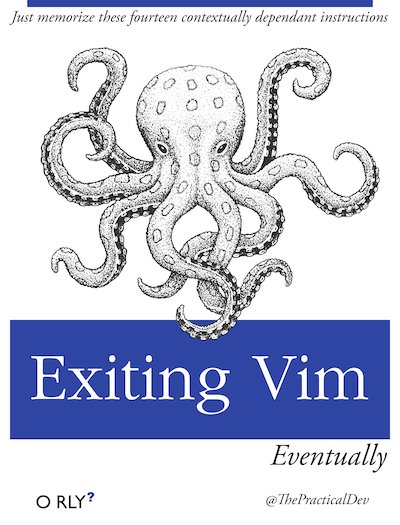 VIM seems like a monster at first if you don’t know how to get startet and just try to use it right away withouth knowing about the basics. But I promise even if you are just an occasional shell user (once / twice a week) you will be more effective and save a lot of time compared to nano. For this you will only need about one hour and an open mind. Before starting this little experiment, put your initial or maybe long groomed objection to vim aside and you will probably have a very similar experience than I had and never look back.

VIM is not intuitive in the way that it does not function like your typical word processor, but it’s intuitive in a sense, that when you know about the basics, the usage concept becomes evident and you will start learning as you go. Because many of the concepts are foreign to most users at first, there is an easy programm to get startet: vimtutor.

Benefits within only one hour time investment

What convinced me to stick with it and learn more about it after vimtutor:

What convinced me the most was the regex style find and replace that you can use the way you use sed. You can limit it to a specific range of lines and use it as “interactive sed”. e.g. change all occurances of a variable between lines 10 and 20 in your file.

To be able to properly use a computer with keyboard and mouse you actually need three hands. There is constant context change between editing and using the mouse. I find this sometimes distracting and rather anoying. VIM does not need a mouse. You use command + motion to get where you want to go or type the line number right away. No need to switch to the mouse. Also marking parts of the code is supported very well and even in ways, your mouse is usually not capable of, which brings my to my next point.

Multiline edits at multiple coursers is easy with blockmode. Selecting “blocks” of code/text is also something you often need, but end up doing by hand, as keybindings for many editors are complicated. Often people don’t even know about this kind of feature.

Have a complicated edit for a line you want to repeat at the next? Just use a macro! You start by hitting q + [a-z] and after that all edits are recorded. When you’re finished, just hit q again. Navigate to the next line/paragraph and replay the same comand sequence by pressing @ [a-z] This is immensly powerful and easy to apply!

In your window based operating system you’re used to windowing/ multiwindow etc. When using the shell there are a couple of methods for this, e.g. tmux. But VIM gives a good opportunity to not have to leave the current editwindow and open previews of files side by side easily from the same navigation.

How to get started

Remember that VIM has modes, a usage concept that is almost completly missing in modern software. In expert applications you will sometimes find it. VIM is an expert system and people who use it are most likely heavy computer users. You probably are too. You just don’t/ didn’t know about modes. vimtutor is therefore your first step to learning vim.

Most systems that have vim installed will also have vimtutor. Just type

in your shell and get started. You will be in a plane vim like environment and have a textbased instruction manual in front of you. It will guide you through every step and you will learn by doing.

when using vimtutor, when applying the commands, say to yourself what you are doing and it won’t feel like memorizing One quick example for this:

delete the next 10 words

change text inside round braces:

This will delete text in surrounding brackets and put you in insert mode. You typically have to do this when changing function arguments.

Remember and focus on the basics of VIM. Most actions consist of three basic concepts that are then composed to make the magic happen.

Count: Well instead of doing one thing over and over again, COUNT is the smart way. It just quantifies how often a certain action or movement should be performed.

Motion: how to move / what unit/ level operations are supposed to be run on

change the next 3 words:

You get the idea and now go, get started!

A really nice and motivating introductory video on VIM and the thinking behind it can be found in: Lost Semster VIM

Advice on not getting frustrated early:

I hope I could spark some interest in VIM and the thinking behind it. To me it was a really nice journey since I started using VIM about three month ago. I never would have thought it would change my way of thinking and working that much. I got more comfortable doing changes in the shell. As a regular shell user concepts just made sense. Since I started using VIM I switched all keybindings in my other IDE’s to VIM mode, as well as my iPython shell. Beside some minor problems with the vscode extension, I am surprised how easy the change was and how relaxing it is to use one set of keybindings in all my editors. So, what keeps you? Go ahead and try it for yourself!